“The origins of Tarot are somewhat obscure; the most common theories go to ancient Egypt and Thoth and the connection to the ancient mystery school teachings. There is a common myth that Tarot was brought to Europe by the Gypsies.

Some believe that a form of Tarot goes back to ancient China. I believe that all ancient civilizations developed their own systems of divination based on the same symbolism and archetypes.

Tarot as we know it today is a collection of images and symbols from a wide variety of cultures, from the ancient Greeks and Romans to the prehistoric Norse peoples, from the ancient religions of India and Egypt to the medieval courts of Italy and France.

The first clear reference that we have to Tarot cards is from a sermon that was collected with many others about 1500 in Italy found in the Steele Manuscript. The sermon is thought to date from about 1450 to 1470 and is a diatribe against games of chance. It gives a detailed description of the Tarot trumps, not only numbering them but naming them as well.

As early as 1540, a book entitled The Oracles of Francesco Marcelino da Forli shows a simple method of divining from the coin suit of a regular playing card deck.

Manuscripts from 1735 (The Square of Sevens) and 1750 (Pratesi Cartomancer) show rudimentary divinatory meanings for the cards of the tarot, as well as a system for laying out the cards.”

– crystalinks.com/tarot.html (This website is very good source for tracing back metaphysical concepts and tools to their historical roots.)

Tarot cards are a tool used for divination and healing. The reader uses their intuition, imagination and the literal meaning of the cards to piece together a story that provides guidance to the seeking soul. My intention on this blog, is to use tarot for healing and not for divination.

Tarot cards are a somatic healing tool that opens up the unconscious of the querent, allowing reader and querent to illuminate the story, aspects of self, and feelings that have been hidden from conscious awareness, which allows for integration between the conscious and unconscious mind.

Healing through integration is rooted in becoming whole by allowing the soul to rise out of the shadow and live fully with ego in conscious embodiment. Using tarot for healing means perceiving the events, situations, and relationships in our lives as mirrors that help us to see within ourselves.

The soul (or true self) is here to heal, grow and evolve where as the ego (conscious mind) tends to be more concerned with “getting the things” that the animal needs to survive and that our culture values as what will make us thrive, such as a spouse, career, home, etc.

Integration values both soul and ego, acknowledging the soul’s healing evolution and the ego’s desire to having loving relationship, fulfilling work, and a place to call home.

The Three Aspects of the Psyche

Ego is the self we are aware of, everything we say, feel, and know. The personal shadow makes up all we repress and deny because the ego seeks acceptance among family, culture, and peers. All ego feels wont be accepted about self gets pushed into the personal shadow. The collective shadow is where the Archetypes live and where collective repression and denial goes based upon what culture won’t accept about being human on the collective ego level.

The personal shadow contains four aspects of what ego denies; wounds, personality traits, feelings, and gifts. Depending on how your ego has developed informs you on what is in your shadow. If you grew up identifying with being insecure and depressed than your self-worth and happiness may be in the shadow. If you grew up with high self-esteem and a competitive nature than insecurity and “just being” may be in the shadow. To make it simple, the opposite of what ego heavily identifies with, believes, and feels, lives in the shadow.

It gets complex, how what is pushed into the shadow mixed with the messages we receive from family and culture of origin, constellate in the psyche. Jung coined the term “complex” to represent the collection of forces living the shadow that cause us to act inauthentically. The mother complex, for example, may include an inherited multigenerational wound of guilt mixed with a mother’s critical behavior of her child that creates an adult ego that tries to please others and be perfect all the time to feel good enough.

Healing begins when we illuminate the shadow and face who we really are and our true feelings. Often times, who we become due to multi-generational wounds, abuse or neglect, parent’s molding, and cultural influences creates an inauthentic ego self. Healing is discovering your true self and allowing the real you to live in the world. Healing the ego requires facing what is inauthentic to who you are and developing an ego that serves the soul or true self.

The three aspects of the psyche work in tandem. Tarot reveals these three aspects. The minor arcana will show personality traits, feelings, thoughts, and desires in the personal shadow and ego. The major arcana reveals the archetypes rising from the collective shadow and it may also reveal multigenerational trauma or wounding.

The cards speak directly to the unconscious and right brained part of us. Somatic means body, and a somatic response is what we taste, hear, smell, see and feel as a sensation. This is how we directly communicate with the world. Although we have yet to scientifically affirm the sixth sense of the body, it is real. The sixth sense is somatic as intuition or a felt sense that rises up from the unconscious, giving us images, sensations, feelings, stories, even taste or smell as a way to communicate with our inner world. 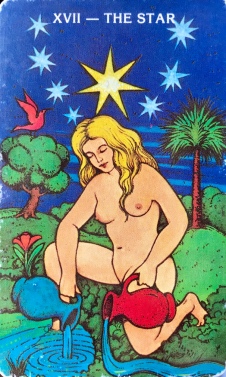 Tarot directly speaks to the sixth sense and the more we practice with this tool the more our intuition is honed so that we have greater skill communicating with the unconscious.